A big excerpt from the upcoming Mad Folk of Falconer.

We’re two weeks away from the release of The Mad Folk of Falconer, story 4 in the Harley Firebird series.  That means it’s sneak peek time.

The Mad Folk of Falconer

A water leaper was sitting on the doorstep of the Lord of the Rinse laundromat, eating a steaming bowl of noodles and vegetables, when Harley walked to work that morning. The leapers’ wings were tucked in behind her, sitting neatly in the corner of the deep doorway. Her legs stretched out, her ragged mukluks, patched and darned, pushed up against the plate glass on the other side of the doorway. The step had been carefully brushed free of snow and slush and was dry—although the leaper had to be freezing, sitting on concrete.

Falconer folk without any clear domicile were a common sight, although Harley and her two lieutenants, Bohdan Kask and Mojag Bear, had worked hard to find spare rooms, or even a mattress in a corner, for many of them. It was February, and Alberta was experiencing historically cold weather—they’d had a -45C day just last week, which broke all previous records.

The bright blue bowl in the leaper’s thin-mitted hand steamed, obscuring her worn, aged face and the mildly elongated ears. Her breath also fogged the air as she scooped squiggly noodles and dark green bok choy with two fingers of her bare right hand. She was bolting the food, as if someone might whip the bowl away at any second.

When Harley turned back to face her, the leaper pulled the bowl up against her chest, her faded blue eyes watching Harley warily.

Harley lifted her gloved hands. “You know who I am?”

The leaper nodded. Her arms moved more firmly around the bowl. They were trembling.

“I’m not going to take your breakfast,” Harley assured her, halting with her boots nearly touching the front of the step. “What’s your name?”

“Violet.” The woman’s voice shook, too.

“Do you have somewhere to sleep, Violet? Somewhere inside?”

“Did one of the other policemen take you to a house and show you a room or a bed?”

“You’re not staying there, though?” In Harley’s experience, lots of homeless people would rather sleep on the streets than indoors. State-provided or non-profit-provided shelter came with obligations and formalities, or just plain unhappy conditions they didn’t want to put up with. It had shocked Harley to learn that the homeless weren’t desperate enough to take just anything. Their pride was as strong as anyone else’s, for pride was often the last valuable thing they had left.

Violet’s mouth turned down at the corners, creating deep folds and wrinkles around her chin. “People there, they’re too noisy. Moving around. Can’t think there. Can’t sleep.”

Harley nodded. It sounded as though Violet was one of the folk who’d been assigned a pallet in the old high school gymnasium. “It’s not perfect,” Harley admitted. “But it’s warm, Violet. These temperatures…you’ll die of cold out here.”

“I just want to eat,” Violet muttered. Harley could see the stubbornness setting in.

“I’ll let you eat in a moment,” Harley promised, for food was the other major issue for Falconer at the moment. Everyone’s indoor crops were failing. All the homes that had been converted to grow-ops raising vegetables were uniformly reporting that plants were failing to thrive, even under grow lights. As more than half the population of Falconer had changed to one of the Old Races, who had no official status in Canada, no one had the money for store-bought food. Someone had clearly given Violet a bowl of food. They’d even microwaved it for her.

“Not cold,” Violet replied. The words were slurred. But she scooped another small handful of noodles, swallowed them and licked her lips.

“You’re shaking with the cold.” Harley pulled off her glove and laid her fingers against the woman’s forehead. “Shh… I’m just making sure you’re okay,” she added as Violet pulled back away from her.

Violet sat back up. “You’re nicer ‘n they said.” This time, the slur was distinct.

“Thank you,” Harley said, her tone dry. She dropped her hand, puzzled. The woman was far warmer than she should be, sitting out here on concrete and dressed in just a thin coat, one that had been slashed in the back to make room for her wings. Yet she was definitely shaking. Harley had felt it under her fingers. And now her speech was impaired.

“Have you been drinking, Violet?”

Violet looked at her, the faded blue of her eyes steady. “Where would I get booze? Besides, it’s all being saved up for later.”

Violet gave her another look, this one of disappointment at Harley’s ignorance. “It be Imbolc, lass. Don’t you know your seasons?”

Violet shook her head and her whole body shifted at the movement. “Imbolc. St. Brigid’s day—it be spring, soon. Later here than anywhere else, because spring starts late. This year…” Violet trailed off.

“This year, we all need to appease her.” Violet shrugged, but as she was already shuddering hard, it barely showed.

Again, the disappointed look. “On account of the crops failing. St. Brigid is pissed, see. We need to get sweet with her again, so the growing season goes right.”

“Sunset, eh?” It wasn’t a question, but the typical Canadian expression that implied both parties were in agreement on the statement just made.

Perhaps the sunset event was nothing more than sending up a silent prayer to the Celtic goddess, and maybe the event would be attended by just one person. Even if it was more, Harley wouldn’t intervene. The town could do with all the help it could get. Why shouldn’t that help come from old deities? The world was populated by old races, after all. Harley wouldn’t dismiss any idea, these days.

From further up Mountain Avenue, where it bent around the back of the town and became a provincial highway once more, Harley heard the heavy snarl of a big engine. It would be the first car to come down the street since Harley had turned into the Avenue herself.

“When you’ve finished your meal, you should go back inside,” Harley told Violet.

Violet grimaced. Harley knew she would make up her own mind about that. As there was nothing else she could do for the woman if she didn’t want the help, Harley put her glove back on, and turned to look north along Mountain Avenue, the direction from which the gunning engine sounds came.

The electric blue Ford F-150 truck roared down Mountain Avenue at a speed that was dangerous. There were no other cars, for few Falconers could afford the running and maintenance of a car, anymore. Old Ones could neither legally own a car, nor hold a driver’s license. But there were plenty of people out walking, most of them heading to their jobs. Even some of the Old Ones had jobs, just as Harley did. They were all in-kind arrangements—swapping food, shelter and other valuables in exchange for labor.

The Ford was running at a speed that in summer would merely get the driver a speeding ticket. But in this cold, with the streets pure ice, most of it black, dry and invisible…

Harley snapped out her wings. It was automatic, that snap, when a few weeks ago, she would have had to think through every movement.

“Holy gods, look at those pretty wings!” Violet cried, behind her. Across the street, some of the pedestrians also glanced over, startled. Some of them stopped at the sight of her wings out at full span. Harley had got used to that, too. Her wings weren’t white like an angels, or black like a water leaper’s. They were a spectrum of all the colors of fire, running from deep red at the bones, to white at the feathered edges.

“Stay tucked in right there, Violet,” Harley told the water leaper, and took off in a running leap into the air. 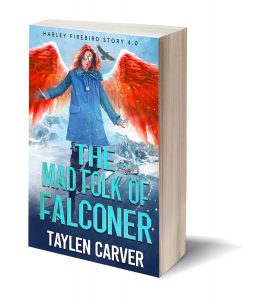 Everyone in Falconer is going crazy.

Harley von Canmore is a firebird, and Police Chief of the tiny town of Falconer, in the foothills of the Canadian Rockies.  Harley’s town is nearly all Old Race people, which creates challenges she never faced as a Royal Canadian Mounted Police Officer.

It is Imbolc—St. Brigid’s Day—and a peculiar madness seems to be infecting everyone in Harley’s town.  She figures it might be because they’re starving in a way only the Old Ones could suffer.  When the madness strikes the town’s shot-gun wielding mayor, who is purely human, Harley must figure out the root of the problem before the whole town tears itself apart…

The Mad Folk of Falconer is part of the Harley Firebird urban fantasy series of novelettes, which is set in the same world as Taylen Carver’s Magorian & Jones series.

The Mad Folk of Falconer is released on August 26th, two weeks from now, on all retail stores everywhere.  If you pre-order your copy directly from me at Stories Rule Press, you get it a week sooner (next Thursday).

We’ve been working to smooth out the buying process on Stories Rule Press, which cuts out a few clicks and pages, so check it out.

Buy From Me @ SRP!
Buy from your favorite retailer!

About the Author: Taylen Carver